USA Today's Your Life vertical, a specialty website launched in November to focus on health, relationships and beauty, hasn't become the must-read needed to make it a success. With too little exclusive content, it's barely distinguishable from other, more established sites in the hyper-competitive market for female consumers. That's worrisome, as Corporate makes a high-profile bet on verticals.

Now, a new hire from The Washington Post suggests the site is in for a makeover of its own. She is Nancy Kerr, the Post's features digital editor, "once practically second-in-command of the post.com website," according to a memo made public today. Kerr is to be Your Life's editor, the memo says.

Your Life is one of several verticals planned for the paper, where the newsroom was reorganized six months ago to more closely align advertising and editorial copy -- a move to gin up additional revenue. That's raised ethical red flags about mixing commercial and news interests, the sort illustrated by a big early stumble at Your Life itself.

Verticals in Martore's sight
In addition to Your Life, there's a vertical for travel, a key category that's suffered hugely as companies cut back on business travel, and hotels reduced the number of USAT's they buy in bulk for guests.

COO Gracia Martore cited the travel vertical when analysts asked about the paper's prospects during the first-quarter earnings conference call April 18. "USA Today is doing a very good job of improving its vertical on the travel side,'' she said, "and looking at other opportunities to garner additional dollars there."

Three more verticals are in the works: diversions, personal finance and personal technologies. (I can't find any of them on USAT's site, although Gannett's annual 10-K report in February said the first two had already been launched.)

Your Life generated 2.5 million pageviews during its first three weeks, the 10-K report said. That's not especially strong, given the big base of USAT's readers, plus the heavy promotion it got on the homepage. (Gannett Blog often averages more than 300,000 views a month.) Hopefully, traffic's improved since November's launch. We don't know, however, because GCI hasn't publicly disclosed any new figures. Of critical importance: What's the net number of new unique visitors Your Life is drawing?

Me-too news
As with all things news, content is king -- especially when it's exclusive. And in that regard, Your Life has suffered. I'm confident the current staff is doing all it can with the little time they're given. Still, many of their stories are of the health-study-of-the-day variety available everywhere. 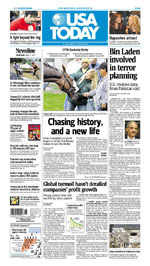 The site relies on plenty of Associated Press stories, too, which also are widely available across the Web. (A casual reader might not notice all that wire service content, however, because -- unlike other sections of the paper -- Your Life doesn't often byline its AP stories at the top; instead, it only hints, with a copyright notice at the bottom. Here's a recent example.)

The Post's Kerr starts after May 13; she's one of five leaving the paper, according to the memo. It's unclear whether she's taking a new position as Your Life editor, or replacing an existing staffer. When launched, Your Life was introduced by Denise Brodey, the site's general manager, rather than an editor. Reflecting their more commercial ambitions, verticals are getting GMs, akin to mini-publishers.

Kerr might consider bringing more focus to Your Life's everything-but-the-kitchen-sink feel. Its major subject areas are health; fitness and food; family and parenting; sex and relationships; mind and soul; your look, and a collection of blogs. The 40 subcategories range from recipes to pets. Editors gamely try to make it topical: A story yesterday was headlined, "Bin Laden's death a turning point for Millennials."

With hope, Kerr has been promised more resources, whether newly hired or poached from other parts of the newsroom. After all, Your Life can use all the firepower possible, given the Gannett Tower's high expectations for this and other verticals of its kind.