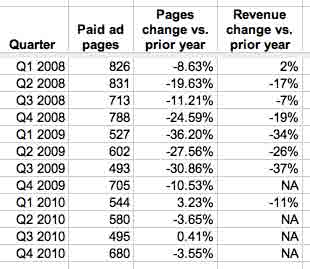 The number of paid advertising pages at USA Today fell nearly 4% in the fourth quarter, Gannett's quarterly financial report showed yesterday -- marking the 10th quarter of declines since early 2008, when the national economy fell into a deep recession that has hobbled GCI's biggest-selling daily ever since.

Pages totaled 680 vs. 705 in the fourth quarter of 2009. (See table, above.) To be sure, the most recent quarter's drop was a marked improvement over the final three months of 2009, when pages fell nearly 11%, a review of financial statements shows.

But to fully appreciate the truly steep drop-off in recent years, consider this: During the fourth quarter of 2007, USAT reported 1,045 pages of paid advertising.

Also yesterday, GCI once more omitted information about USAT's overall ad revenue trend. Previously, GCI had generally reported revenue changes at the daily, whether up or down -- an important barometer of USAT's financial health. In fact, however, the revenue figures had shown a steady march downward -- a trend that apparently proved to be a public relations problem for the company. The last time GCI reported the information, in 2010's first quarter, USAT's revenue had fallen 11% from the prior-year's quarter.

Soon after that omission, Publisher Dave Hunke announced a big staff reorganization meant to arrest declining advertising and circulation. With only advertising page data -- and only in print -- it is difficult to assess the newspaper's health. Still, the 4% page decline in the fourth quarter is not a good sign.

USAT is the only business unit for which GCI breaks out any results. 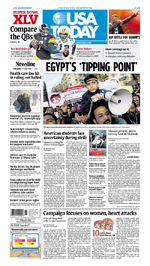 During the question-and-answer portion of the call, Martore told analysts that USAT's circulation was basically unchanged in the fourth quarters vs. the prior year's quarter: "So good news on the USA Today side as we had indicated in December from a circulation standpoint."

Was USAT weakness surprise?
Analyst Douglas Arthur of Evercore Partners asked: "Just staying with USA Today for a second. Did the weakness in print advertising in Q4 surprise you? And when I look at the categories that you cite weakness, in technology, telecom, auto advocacy, that it doesn't seem to jive with what were seeing in the market as a whole. So could you talk to sort of your plans going forward to turn the print side of the paper around?"

CEO Craig Dubow's reply: "We have been working hard. I have to say when you take a look at some of the other key categories, it was a bit mixed. But I have to say auto has done very well from overall. Retail has picked up significantly. And despite where we are on other real estate, that has done fairly well also. So there are a number of areas that David Hunke is really working on with his new verticals strategy. And we're beginning to see some other opportunities as the health of the market picks up."

Dubow continued: "But for Q4, we did see -- with travel, there were some very positive increases there. the Financial and insurance also had a good number, and credit cards was a pretty good solid number as well. So it's a little different than what we're seeing in our other products, certainly, at USCP. But I think we're making some very, very good progress."
[Image: today's front page, Newseum]
at 5:38 PM