Several readers have sent me the text of laid-off sports editor Frank DiLeo's column today in the Daily Record -- a column they were surprised to see in print. (Me, too.) The paper, in Parsippany, N.J., is one of three Gannett dailies losing nearly half their combined 99 newsroom employees this week in a work consolidation.

"Everyone is cheering and wondering how it ever got into the paper,'' one of the readers told me. "It is not available on the Daily Record's website. Please publish it as a post on your blog."

The column appeared under the headline, "In the game of life, there are few winners."

"Anger is an acid that can do more harm to the vessel in which it is stored than to anything on which it is poured.'' -- Mark Twain 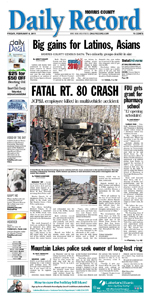 The Daily Record sports department has strived over the years to bring you the best coverage of Morris County athletics as possible. Whether it was online or in print, in a weekly newspaper or a daily, we took great pride in the service that we provided for the community.

But all that work, all the sacrifices we made are worth nothing.

For the second time in two years, I am being laid off from my job as sports editor of the Daily Record. This despite being a 35-year-old manager who has received nothing but praise and exceptional reviews, always put his employees first, and truly cared for the community. In my 12 years with the company (Gannett), I have received almost every local, state and national award for my field, from headline writing to page designing and much more.

I even won the first New Jersey Press Association award for innovation a few years back.

It's ironic that in such a short time, I became a dinosaur.

Why was I laid off . . .  again? I wish I knew, as do the other great folks here who put in decades of service only to see their career come to an end with no explanation.

I worked hard to build my career, only to be left with a few weeks of severance and reminders of what used to be.

Those of you who know me well know that I don't put much stock in emotion. But I can't help but to feel like a rube on the midway for thinking that someone as young, talented and loyal as I was would be able to stick with a company after proving time and time again that there was nothing I couldn't or wouldn't do for the good of the corporation.

I've worked through pneumonia many times, bronchitis, pleurisy, broken ribs, migraines, a gallbladder that stopped functioning for six months and many other ailments that I ignored doctors orders to stay home. All for the good of the company. This is where it got me.

But I am not alone in my bitterness.

Many great people worked their last day at the Daily Record on Friday. Nearly half the staff has been let go from an already thin crew. Folks that have been for over 30 years had to reapply for their positions and drive to Neptune, some of us had to do it four times in a span of two weeks, to be asked the exact same questions as the previous trip.

You'll have to ask Gannett management that question yourself, because I've never received anything resembling an explanation.

My guess is that we're all victims of corporate greed, just like millions of folks out there going through the same thing.

Things like truth, honor, work ethic and integrity mean nothing on an Excel spreadsheet. It's all about profit margins.

Gannett is not alone in this new world order of treating customers like an annoyance and employees like dogs who should be happy with whatever scraps are leftover.

Pick any major company, and you'll find an indifference to customer service and quality.

The Daily Record, more so its parent company Gannett, is no different.

Please don't take this as knock against the Daily Record's bosses. They're great people who truly care about the community and this newspaper. Corporate greed everywhere has run amok, and we the people are left to deal with the consequences of its wake.

Frank DiLeo can be reached at frankdileo1107@yahoo.com.

A cardboard box on an empty desk. A final conversation. Job applications and phone calls going unanswered. Please share your layoff story in three or four paragraphs. Post replies in the comments section, below. Or e-mail via jimhopkins[at]gmail[dot-com]; see Tipsters Anonymous Policy in the green sidebar, upper right.