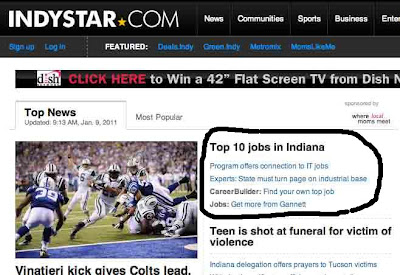 Marching in lockstep, Gannett newspapers today launched a Corporate-driven editorial series about jobs, one that reads too much like advertorial to boost employment advertising -- even as it's being presented as public-service journalism.

For example, the Indianapolis Star's homepage features four links under a "Top 10 jobs in Indiana'' headline. (See screenshot, above.) One of the links takes readers to CareerBuilder, the employment site majority-owned by Gannett. Bending journalism ethics, the Star-branded CareerBuilder page doesn't disclose that the two companies are owned by Gannett.

A second link takes readers to another Star-branded page that appears to be a ContentOne production. It includes some editorial matter produced by USA Today and the Star -- and yet more content produced by CareerBuilder. Once more, the CareerBuilder business tie isn't disclosed.

Elsewhere across GCI, here's how Publisher Amy Pack tip-toed around the project in a letter to readers of her two California dailies: "We’d like to help our readers by creating an environment for the employment ads right here in the main news section of the Times-Delta and Advance-Register."

[Updated at 6:21 p.m. ET: It appears Corporate supplied some of the language for Pack's note. When I Googled her phrasing, I turned up similar letters signed by other Gannett publishers in communities that include Burlington, Vt.; Mountain Home, Ark., and St. George, Utah.]

Now, it's your turn. How did your newspaper launch the series? Please post your replies in the comments section, below. To e-mail confidentially, write jimhopkins[at]gmail[dot-com]; see Tipsters Anonymous Policy in the rail, upper right.
at 9:54 AM