But that's not the only reason working conditions have grown even more uncomfortable at Gannett's biggest newspaper. Some 1,500 workers have been left anxious about their future employment since Publisher Dave Hunke (left) surprised a staff meeting last week with news the paper would be reorganized in the weeks ahead.

He did not reveal many particulars -- including, most crucially, a timetable. Anonymous@7 a.m., commenting today with the authority and phrasing of a manager, wrote: "Hunke said the details had not yet been worked out; there are teams working through the details and he is listening to them as they help develop the future path."

Indeed, one Gannett Blog reader said Hunke didn't acknowledge layoffs were part of the deal until well into Thursday's meeting.

"He called them 'involuntary layoffs,' and it didn't even come up until the Q&A session and someone asked if USAT would be hiring more multimedia people,'' Anonymous@8:38 a.m. wrote yesterday. "Either Hunke buried the lede or he has so little regard for us that he just plumb forgot to mention the fact that some of us are going to be laid off, and soon."

Their comment continued: "So if you didn't know you were a fixed cost and actually thought you were a valued employee who helped build the so-called legacy product, that should open your eyes."

Hunke's disclosures weren't much of a surprise to Anonymous@2:35 p.m. today, however. They write: "We have all known there will be a reorganization when Hunke was brought in to deal with the circulation and ad declines. What we don't know is the details, and Hunke was not forthcoming on details at that meeting." 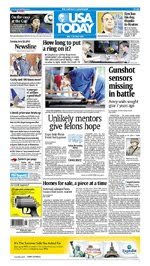 Busted business model?
Whatever the "future path,'' it appears USAT's long-standing business model, one unique among Gannett's 100 dailies, may be broken. Overly dependent on the business travel market, where it fed millions of heavily discounted copies to hotel buyers, the 28-year-old paper continues to be roiled by a downturn in business travel, amid heightened competition with its two national rivals: The Wall Street Journal and The New York Times.

Circulation plunged 14% from a year ago as of the most recent reporting period, the six months ended March 31. Advertising revenue fell 11% during the first quarter, far worse than the overall 8% decline among Gannett's papers, public documents show. One Tuesday last month, the paper's main A section carried only two advertisements.

Hopes for even a small bump in subscription revenue from the new iPad app starting July 4 were dashed when a USAT executive recently acknowledged that Gannett had delayed plans to start charging for the software. Meanwhile, nothing yet has come of speculation that USA Today is negotiating a deal with Wall Street Journal owner News Corp., one that could result in a sharing of advertising sales or news distribution.

Hunke as White Knight
He was brought in to turn around USAT in April 2009. At the time, Hunke was riding a wave of success: As CEO of the Detroit newspaper operation, he had led a major reorganization where the two papers there reduced home delivery to just three advertising-rich days each week. The Gannett-owned Detroit Free Press had won a prestigious Pulitzer Prize for reporting that led to the mayor's resignation, conviction and jail time.

But now, more than a year later, a solution for USAT's woes has proved elusive. His revelation that a reorganization is in the works suggests Corporate is losing patience. Gracia Martore, named Gannett president nearly five months ago, still holds the position of chief financial officer. One can easily imagine that she and Hunke are spending lots of time together as his team of managers develops the new business plan.