In other corporate directorships, fewer distractions 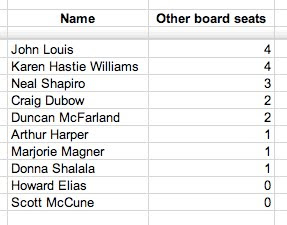 By one measure -- the number of their other corporate directorships -- Gannett's board of directors has a pretty good record, as they prepare to start a series of GCI meetings on Tuesday.

With the exception of Karen Hastie Williams, they've restrained from overextending commitments to other corporate boards, according to GCI's list of members' directorships and trusteeships. After all, the fewer other board seats held, the more attention they can pay to overseeing Gannett's top executives. (So long as the directors choose to, of course.)

Although the chart, above, shows John Louis with four seats, two of them are at non-profits organizations: Northwestern University and the Chicago Council on Global Affairs. Likewise, Neal Shapiro's three directorships are all at non-profits, including Tufts University. One of Dubow's two other directorships is on the Associated Press' governing board.

Related: capsule biographies of all 10 Gannett directors
at 3:00 PM

Email ThisBlogThis!Share to TwitterShare to FacebookShare to Pinterest
Tags: Board of directors, SEC documents