Documents hint at '08 bonuses for Dubow, others

Gannett gave stock options last week to CEO Craig Dubow and 10 other officers, part of their 2008 pay, new public documents show. The options give execs the right to buy GCI at $3.75 a share. But they're already worthless, because shares closed Friday at $3.24. 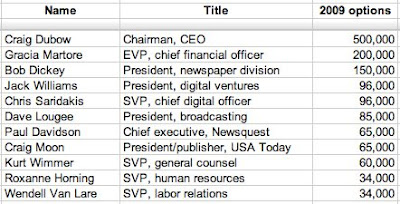 Athough Gannett's shares dived 89% last year, newly filed company documents show CEO Craig Dubow is getting a stock bonus with seven-figure profit potential. That would be in addition to his $1 million reduced salary, plus any cash bonus coming his way. Reading between the lines, however, Dubow may not be getting as rich a bonus overall as last year; we'll know when final compensation figures for the top brass are published in the weeks ahead.

Dubow and perhaps hundreds of other senior managers near the operating-committee level get a chunk of their pay in Gannett shares -- often, in the form of options. Last year, 44% of Dubow's $7.5 million in total pay was in options, valued at $3.4 million. The rest was his $1.2 million in salary, and a $1.75 million bonus, paid 25% in stock. (2008 compensation table.)

What are options?
They give investors the right to buy company stock at a fixed price -- the strike price -- no matter how high the open-market price goes. For example, say GCI suddenly jumps to $5.75 a share. Over time, Dubow could buy the 500,000 options he just got for $3.75 each, turning a $1 million paper profit.

But if the stock does the opposite -- declines -- the options are worthless. For Dubow, last year's $3.4 million in options have no value; the strike price was $31.75, documents show.

Dubow (left) and the 10 other officers just got their options for their work last year; Gannett filed the Forms 4 paperwork on Friday, with the U.S. Securities and Exchange Commission. I've now reviewed the documents, comparing the 2009 options to those a year ago. (All GCI SEC filings, to 1994.)

I focused on Dubow and the eight other executives who were in substantially similar jobs in 2008 and 2007. (Chris Saridakis got named chief digital officer in January 2008. Bob Dickey got promoted to newspaper division president in February 2008.)

Highlights: 2008 vs. 2007
The nine executives this year got a combined 1.14 million options, all on the same terms: a $3.75 strike price, GCI's closing price last Wednesday, the day the options were granted. The options vest in four, equal annual installments, starting Feb. 25, 2010.

Last year, when shares were trading higher, the execs got fewer options: 448,500, with a strike price of $31.75. Those vest in four equal annual installments, beginning this past Friday.

The newest options are already "under water," because Gannett shares closed at $3.24 on Friday. Unless shares rise above $3.75, the options just granted remain worthless.

Gannett doesn't estimate dollar values for Dubow's and the other executives' options awards; those figures will be disclosed in this year's shareholder proxy report, likely to be published within the next two weeks.