How to save Gannett, for under $10 million 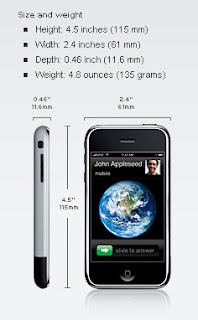 Buy an iPhone, Palm, BlackBerry or some other smartphone for each of the journalists in the company's newsrooms.

I bought an iPhone a week ago to replace the company-issued cellphone I gave up on my last day of work Thursday. For all I write about technology, I'm really not that much of a geek. But Apple's first cellphone is absolutely, totally, freakin' amazing. (Watch this video presentation on Apple's website.) And it's already transforming the way I look at work in general, and journalism in particular.

The iPhone, it turns out, is my new desktop -- and in the future, I'm taking my desktop wherever I go. For example, I've been reading newspapers on the phone's 3.5-inch (diagonal) screen. Nothing says digital revolution like putting yourself in the shoes of a 20-something who doesn't read newspapers in print, or even online -- but on a mobile device instead. I'm learning the importance of writing way-tight, and with a strong impact sentence or two by the second graph. After all, anything I write for cellphone delivery will linger on the small screen for just seconds before a potential customer reads it -- or moves on. You don't want inches and inches of copy on a cellphone screen; short, quick takes are best -- not unlike blog posts.

Now, I knew mobile delivery was key to journalism's future well before I pulled out my credit card at the Apple store in downtown San Francisco. But it's something else again to spend a week actually living on a smartphone. What would it cost Gannett to similarly put all its newsroom staffers in the shoes of its fleeing customers? Let's assume there's a combined 5,000 journalists at the 85 dailies and 23 TV stations. GCI could buy $399 iPhones, for example, and the least expensive $60 monthly service under the mandatory two-year AT&T contract for less than $10 million. That's not far from what GCI paid CEO Craig Dubow in 2006. Now I ask: Which do you think would be the best investment?

Use this link to e-mail feedback, tips, snarky letters, etc. See Tipsters Anonymous Policy in the sidebar, upper right. Or leave a note in the comments section, below.

Email ThisBlogThis!Share to TwitterShare to FacebookShare to Pinterest
Tags: Tech 101